One of the rising stars in amateur golf is getting a shot to etch his name amongst some of the all-time greats next month.

Flynn survived a sudden-death playoff against Logan Kuehn of Lake Charles and finished one stroke behind Andy Lopez for medalist honors. Flynn, who previously earned a berth in the 113th Southern Amateur that will be held July 17-20, fired an impressive 4-under 68 in Monday’s opening round before carding a 2-under 70 in the final round.

The 36-hole championship match will be contested over two courses for the first time. Scheduled for Sunday, Aug. 18, it will open with the morning round on Course No. 4, which was recently redesigned by Gil Hanse. The afternoon round will be played on Course No. 2, the renowned Donald Ross design that was restored by Bill Coore and Ben Crenshaw in 2011.

Some of the notable former champions include Tiger Woods, Jack Nicklaus, Bryson DeChambeau and Viktor Hovland, who had the low amateur score earlier this year in the US Open and the Masters. 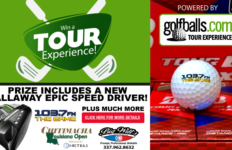 Louisiana to Remain in Modified Phase 2→

COVID-19 Vaccine in Louisiana: What You Need To Know→