NATCHITOCHES — Delta Media was awarded for its radio excellence on Sunday — including a pair of top honors during the Louisiana Sports Writers Association annual awards luncheon.

Judge’s comments, “To be honest, this show’s submission started off a little sluggish and I didn’t think that I would enjoy it. But once it got going, it was wildly entertaining. The way the hosts went back and forth with one another, and gave each other hell was pretty funny. The stories they were able to pull out the guest was tremendous. Not your typical sports talk format and that’s what made it stand out among the other very good submissions.”

Judge’s comments, “This broadcast team seemed much more natural working together that the other submissions in this category. Seemed liked they have done the games together for a while and their knowledge of the program was apparent. A very good back-and-forth between the play-by-play and colors commentator. A very good broadcast team.” 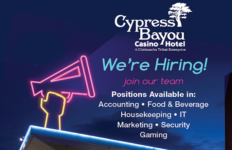