The first single off their upcoming album Mercury – Act 2 is an introspective song that sees frontman Dan Reynolds consider his own mortality. The driving beats have that typical Imagine Dragons sound to it and it works.

The follow-up to Mercury – Act 1 is dropping on July 1st and the group is currently on tour.

A double dose of Imagine Dragons is hitting your airwaves! If you’ve watched the Netflix series “Arcane”, which is based on the popular computer game League of Legends, you’ve probably heard this song every time you get to a new episode during a binge watch. Just the energy from Dan’s vocals is enough to make it an immediate add to any gym playlist.

The Maine – “Loved You a Little”

This may be the breakup anthem of 2022. The Maine teamed up with 2000s emo icons Taking Back Sunday’s Adam Lazzara and Charlotte Sands for this high energy track that makes you yearn for the days of MySpace, skinny jeans, and Hot Topic band tees.

The sequel to their breakout single “Hayloft” and it’s already started to make waves on the internet as part of the deluxe edition of their smash album Inside with well over a million streams. The Canada-based group has quickly risen up the charts and are looking forward to a US tour starting in September 2022 that features stops at iconic venues like the Hammerstein Ballroom and the Palladium in Los Angeles.

RÜFÜS DU SOL “On My Knees”

A release from late last year’s Surrender, RÜFÜS DU SOL’s “On My Knees” has that early 2010s EDM sound blended with some Imagine Dragons. The track is without a doubt the darkest sounding and it has all the right elements to it.

This indie-rock trio based out of Tulsa, Oklahoma dropped their self-titled debut in late 2021 and it’s been soaring up the charts for good reason. The three-part harmonies combined with a sound that is reminiscent of mid-2000s alt-rock bands like Arcade Fire is a perfect combination.

If you’ve browsed TikTok at any point, you’ve probably heard this track on your “For You” page. This catchy track from the masked singer has been streamed well over 100 million times and the 19-year-old is currently on his first headline tour. 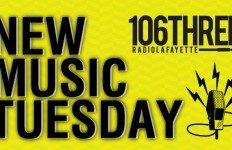 Imagine Dragons’ Dan Reynolds Has a Little Fun with the Internet→